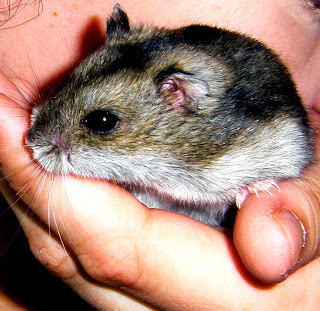 A few weeks ago, I introduced my Djungarian Hamster Lina to you. She's the cutest little animal in the whole world. Last week, she got very ill. I thought she would die, although she isn't even one year old. I ran to the vet several times, who is fortunately in my block. In the end, he had to operate on Lina. This was very risky due to the fact, that those extreme small animals often die under anesthetics. But luck was on our side!!! Lina was so brave. And while I was sitting in my room, praying for her little life, she fighted like a lion and survived the surgery. The vet was surprised by her and my dedication, because I read everything in the web about her illnes and how I could help her and asked him thousands of questions. Now she is getting better with every day. I have to give her antibiotics and pain killer and she sleeps a lot. But during the night, she is collecting grains again, so I know, she is getting better ;)
Posted by Mel at 11:07 AM